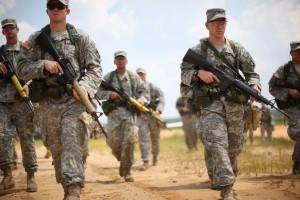 Many people would disagree with us but we would love it if people banned together for this cause. We are asking if you are in the military and have a military identification card that is valid then you should reserve the right to drink as an adult of 21.

We feel it is a sorry fact that anyone that is 18 years of age can go into any military branch, learn discipline and very mature skills, go fight for our country and put theirs lives on the line but can order a drink at a local pub or on their vacations of service. If you can die for your country then you deserve the right to drink.

We are not asking to lower the age of drinking, if we lowered the age of drinking to 18 years of age it would be complete chaos most people of that age do not have the maturity or discipline to drink responsibly. But when anyone goes into the military each man and woman becomes isolated and are expected to learn discipline on a daily basis until it is engraving into their brains so they deserve the ability to have a drink or 2 when they wish.

But to balance this out between young mistakes and the safety of others we also think if a person who is over the age of 18 and under 21 with a military id is caught in any type of drunken behavior and is caught then he or she would also serve double the punishment. Such as a DUI might be 6 months loss of license and 1 year probation in some states, well what ever that states laws are they are doubled if you are between these age ranges with a Military id. Not to mention the Military commanders usually have fun attitude adjustments if they hear word of any wreck less acts with alcohol.

With double the punishment we feel this is a fair way of allowing people of the armed forces under the age f 21 to enjoy their adulthood just like anyone else.